Sometimes I’ve been accused of going overboard with my concept of “hockey is family”.  But this past fall, the hockey community came together in such a great way to honor one of our own and this weekend we are proud to say we get to be part of the group that gets to honor a great hockey fan.

This story starts like so many of our friendships.  Two friends meet over a love of something, this time it’s NHL on XBox.  Graeme Fortlage and Carter Jansen were both in middle school when they met online and developed a friendship over hockey, specifically the Winnipeg Jets. 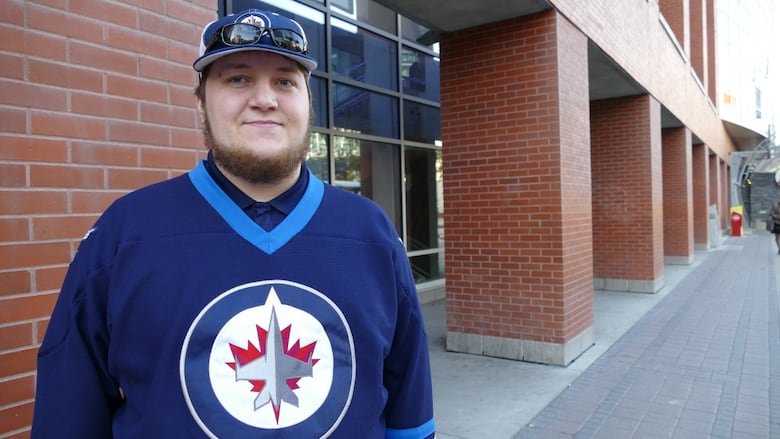 Graeme Fortlage, the friend we all wish we were

Carter lived 9 hours from Winnipeg and between work commitments, time, and cost, he’d never been able to go to a Jets game since they had returned to Alberta.  But circumstances changed in 2016 when Carter was going to enroll in college and be three hours closer.  Graeme and Carter made a promise to attend Carter’s first Jets game for the season opener of the 2016-17 season.  Unfortunately, on May 19th, 2016, tragedy struck when Carter died on the scene after a collision with a semi truck, meaning he never got to go to that first game.  You can read the full story here.

As Graeme shared with me when we first spoke, he struggled for a while to figure out how to best honor his friend and his memory.  Then one day, he decided that it would be a nice way to honor Carter to have a Jets jersey printed with his name on it and take it to a Jets game. His plan was to then give the jersey to Carter’s family as a memento of their friendship. What happened next is why this little hockey family we call hockey twitter is so great.  Upon hearing this, many folks said “why just Winnipeg? Why not get Carter to every NHL arena?”  At that moment, the Carter Jersey Tour was born.  Friends of friends and strangers came out of the wood work to offer to help make sure the jersey made its way to the arena, some pictures were taken, and the jersey would make its way onto the next stop.  Before he knew it, Graeme was doing the logistics for a 30 team tour to include the NHL All Star game for Carter’s jersey.

We want to thank Cat Silverman for suggesting Graeme reach out to us to be part of the Carolina stop for Carter’s jersey.  Later this week, the #10 Jets jersey will arrive at the 328 WWHQ and we have a whirlwind tour planned for Carter.

When I first spoke w/ Graeme, I was in awe of how excited he was that so many people wanted to participate.  As we began to discuss what we should do to honor Carter, it quickly become clear that we should treat the jersey just as if Carter himself were here and attending his first game.  So, if you come to Carolina for a game, what should you experience? You got it: a tailgate and a game.

So, this Sunday, in the east parking lot, Section 328 will be hosting a tailgate in honor of, and with, Carter.  Tailgate starts at 4:30 and we will have some food and drinks to share until it’s all gone.  We will have cornhole and music and all the stuff we normally have at a Canes tailgate.  We want to fill the east lot grass with as many people as possible so that when the time comes, we can get a picture with as many Caniacs as possible with Carter’s jersey as a memento to send to Graeme and Carter’s family.  We’ve worked w/ the Canes to make sure Carter gets into the pre-game skate and we get some pics on the ice with him.  Carter will join Wade Minter in the PA booth for the line up announcements before the game before finally making his was to Row C of Section 328 to take in a game with us.

So, Caniacs, now is the time for us to come together as a hockey family to honor the memory of a fallen hockey friend.  Please, join us in the east lot at 4:30 for tailgate, drinks, and fun.  Come take a picture with Carter’s jersey.  Group picture will be at 5:45 sharp and we hope to have at least 300 people there for the picture.  If you can’t make the tailgate but want to pay your respects, please come by 328 during intermission and Carter will be hanging out with us in the concourse.

Let’s welcome Carter to Carolina with a party like no other, and then send him on to his next step, Madison Square Garden, knowing that he had a great time, and we’re all better for having his memory as part of us.

[…] • A jersey that’s making its way across the NHL this season made its stop in Carolina this weekend. [Section 328] […]