In Star Trek (stay with me here), cadets who strive to be captains of their own ship face a training simulation that’s known to fans of the show as the Kobayashi Maru scenario. In it, the cadet, running a simulated mission as commander, is faced with a choice of trying to answer a distress call from the ship Kobayashi Maru (hence the name) and potentially start a war in the process, or ignore the distress call and leave the Kobayashi Maru’s crew to die a certain death. Knowing they’re screwed either way, cadets try their best to approach the task with the least amount of harm, and generally fail miserably, perhaps most notably Vulcan Kirstie Alley in Star Trek II: The Wrath of Khan.

Ed. note: I assume all of the above is accurate, but have never watched Star Trek.

Unfortunately for Canes GM Ron Francis, his Kobayashi Maru is all too real, except that it’s called Eric Staal.

Eric Staal will collect $9.5 million from the Carolina Hurricanes ($8.25 million in cap money) during the 2015-16 season, after which he will be free to seek employment elsewhere, unless Ron Francis can convince Staal that he wants to stick around, albeit at a lower paycheck than he’s used to. Now, I don’t think it’s going to take much selling to get Staal to stay outside of money – he’s played his entire career for the same team, he likes the area, his brother plays here, he’s already won a championship, etc. Eric Staal doesn’t “want out”, but he’s not going to play for free. I think if Eric Staal is given what he deems to be a “fair” contract around market value, he’ll sign. 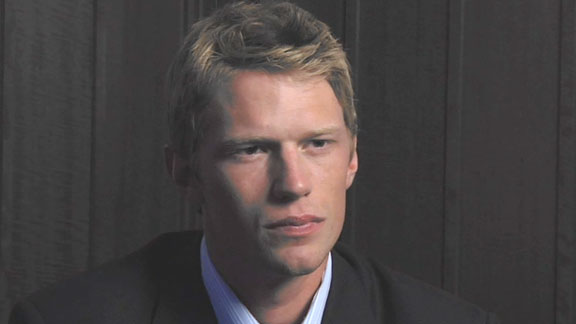 Not sure if “fair” offer.

Aye, but there’s the issue. While player and team are always going to be somewhat apart (that’s how this dance goes, after all), public perception of Eric Staal deserves to make isn’t ever going to be in the same ballpark. I’ve already talked about how loving/hating players based upon their salary is silly, but that’s not going to stop a vocal part of the Canes fanbase to scrutinize negotiations and insist that whatever number Ron Francis is even thinking about offering Eric Staal should be cut in half, and Staal should take it because damn it he already has enough money and he owes it to the team or something.

Here’s the thing. Eric Staal might not be the player he was back in 2008 when he originally signed his deal and the fanbase collectively swooned because here was the future of the franchise and thank the almighty that he’s staying in Raleigh and likes it here. But he’s still a damn good hockey player. Could you imagine what he’d get in free agency? A reminder – NHL free agency is generally an outlet mall with Bloomingdale’s prices, with NHL GMs giving $20 million+ for slightly irregular wingers and discontinued defensemen. Mikhail Grabovski! Stephen Weiss! Ryane Clowe! David Clarkson! Brooks Orpik! Imagine Eric Staal in a market that willingly paid Dave Bolland $27.5 million over five years. GMs will collectively lose their minds, and don’t think that Eric Staal and his agent aren’t well aware of this.

But at the same time, Eric Staal is also coming off of his worst statistical season since his rookie year. His 54 points led the Hurricanes, but tied him for 71st in the NHL. His ice time is under 20 minutes a game for the first time since the 2005-06 season. He’s also battled injuries the last two seasons, including a major knee injury going into the 2013-14 season, and a broken foot this past season. He’ll turn 32 in the first month of his new contract, wherever that might be, and players generally don’t see their scoring outputs increase when they begin to enter their mid-30s.

Probably the worst news for Ron Francis was the re-signing of Ryan Kesler with the Anaheim Ducks. Kesler, who is about two months older than Staal, was also due to see his contract expire at the conclusion of the 2015-16 season. But Kesler signed an extension with Anaheim – a six year, $41.25 million deal that will see him making almost $7 million a year through the 2021-22 season, when Kesler will be 37 years old. Opinions might vary, but Staal is at least as good as Kesler, so a deal of 6 years at $7 million per season would have to be assumed, or at least something in the range of a little over $42 million. I’m not saying that he’s worth that or not – I’m just saying that if I’m Eric Staal and I saw Ryan Kesler’s deal, that would be what I would expect.

But that’s none of Kesler’s business.

But then there’s the history, too. This isn’t Cam Ward, where rookie goalie voodoo on hockey’s biggest stage has been stretched over 10 seasons of league average play. This is Eric Staal, four-time All-Star, member of the Triple Gold Club, and the leader in games played, goals, assists, and points for the Hurricanes – by a healthy margin. Rod Brind’Amour was a Philadelphia Flyer (and a St. Louis Blue before that). Glen Wesley was inherited from the Whalers, but was a Bruin before that. Ron Francis himself played most of his career for Hartford and Pittsburgh. But Eric Staal, for better or for worse, has always been a Hurricane, and it will be hard to let that go.

So how does Ron Francis come out of his Kobayashi Maru with the least amount of casualties? Potentially overpay for a player that may be on the downside of his career? Let him leave/trade him and scramble to replace the lost points as he succeeds elsewhere (something Francis has personal experience with)? Either way, you’re going to piss off a chunk of the fanbase.

When frustrated Starfleet cadets question the benefit of the Kobayashi Maru scenario, they’re told that they’re not being graded on whether they can “beat” the scenario, but instead it allows the instructors to assess their character when facing an impossible situation. Ron Francis’ Kobayashi Maru will do the same, giving us some insight on the type of GM and leader the former Canes captain will be as he tries to guide the team back to respectability.