You know every late-April or May when you miss the Canes, but have to watch playoff hockey because it’s, ya know, playoff hockey. You’ve got your bracket filled out and want to check in on hopeful bragging rights. You inevitably watch some Eastern match-up, maybe it’s the annual Rangers/Capitals seven game series, or maybe the latest Pittsburgh collapse. We all do. We all soak in these series that only get 3-5 goals a game and it’s thrilling, nerve-wracking, and intensly fun. Although Pittsburgh media often blames the death of exciting hockey on whoever knocks them out of the playoffs, they’re wrong. Playoff hockey is the best of all sports. We all know this. It is known.

The Canes have been floating around hockey .500 lately and compiling a winning record more oft than not. There are whisperings of the playoffs, of a chance to actually watch OUR team in them. Whether or not we make the playoffs, this season is a success that rests on the back of a wonderfully talented young defense with an uncanny ability to suppress the opponent’s shot attempts, shots on goal, and scoring chances. We’ve got a long road ahead, but for us in North Carolina, it’s late April now.

What I’m getting at here is that the Hurricanes are quietly learning how to play playoff hockey. Limiting the opponent is the way to grinding out playoff series wins. Don’t get me wrong, I’m not saying we’re ready. We need more finish, consistent goaltending, some luck, and some dynamic offensive talent wouldn’t hurt. But our guys have got the suppression thing down and it’s beautiful.

I wonder what Bill Peters would have thought if, before the season started, you told him that, “Yeah you’ll get the best defensive prospect in the draft and he’ll play right away, but he won’t even be the best rookie defensemen on the team.” Sure Canes fans in the know knew that Jaccob Slavin and Brett Pesce had potential, but it’s a stretch to think anyone knew these youngsters–all playing in college last year–would be doing what they are doing in the NHL. The good news for us is that all three of our rookie blueliners are absorbing the NHL game, the lessons, and the system, and they are getting noticeably stronger and more confident as the season progresses.

Canes AGAINST Statistics and NHL Rankings as of 1/17 (data from war-on-ice.com)

Hopefully these incredible numbers speak for themselves. It’s pretty hard to believe that, not even two seasons past Kirk Muller’s tenure, the Canes have fully committed to playing a suppression-based team game. The sad thing is when you look at the goals against/60 stats the Canes drop to tied for 19th in both all situations (2.7) and even strength (2.2). If the Canes had consistent, league-average goaltending it’s possible we’d be as high as second in the Metro division.

Coming into this season, fans knew the team defense wouldn’t have as many red flags as team’s offensive, but there were still plenty of questions about our personnel. Our defensive forward group is shallow on talent, Wiz was hurt from day one, and Murph still can’t stick. Instead the Canes are pulling off these impressive team defensive numbers with our noted first-year pros and underused forward cast offs from other teams like Joakim Nordstrom and Andrej Nestrasil.

Last week I talked about our forward lines’ performance as units, and I won’t rehash that here, but will reiterate that Eric‘s line does an amazing job of getting the lion’s share of scoring chances, which obviously limits the other team’s ability to do the same, and that both brothers’ lines do an above average job of limiting the shot attempts of those up against them. Those amazing numbers listed above are not from the great play of our defense alone, but a solid and consistent team game from all involved. 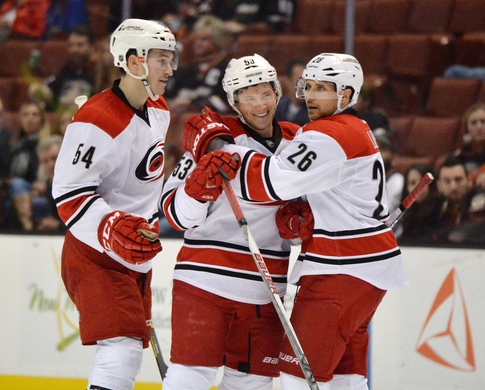 Liles is all like “I will teach you the way of the Corsi” and Skinny is like “LOL wut”.

However, I do want to highlight one pairing. Did you know that Brett Pesce and John-Michael Liles have the 6th best Corsi against/60 in the entire league among pairings with greater than 350 minutes played together at even strength? Their CA/60 is 45.43 compared to an NHL average of around 53. On top of that, their scoring chances against/60 of 21.69 is good for 8th best in the NHL. Many of our other pairings have very pedestrian numbers that are close to the league averages compared to Pesce/Liles.

Last week Jeff Marek spouted off a very impressive catalog of statistics recorded by Sportlogiq on the Marek vs. Wyshynski podcast (around the 43 min. mark).  Here’s the list of where our defense ranks in various statistics:

And then he rattled off another list focusing on neutral zone play:

Now this Sportlogiq data is probably two weeks old and has likely shifted some, but that it’s an impressive list goes without saying. That our team does so well in defending the neutral zone goes a long way in limiting what actually turns into a chance or shot on goal against.

The team wouldn’t be so highly ranked in many of these defensive statistics if they weren’t consistent within their system. Included below is a heat map that demonstrates that consistency by showing the distribution and density of shot attempts and scoring chances against/60 from each individual Canes’ game this season. The contour lines group games by how close they are to each other on the chart, which then shows where the games are most commonly occurring by creating the denser, redder circles. This viz was created on request by C. Tompkins. He does lots of excellent stuff like this and with dCorsi. Give him a follow @Null_HHockey and read more about his heat maps here.

The flattening of the map demonstrates how wonderfully the Canes do in consistently limiting opponents’ scoring chances at 5on5. Most games look around the 18-27 chance against range. I love that this team’s ability to suppress chances creates a droopy version of our own Sightless Eye logo whereas our team’s identity creates the team’s logo purely by chance.

There’s less consistency in suppressing shots against(Corsi)/60, but since the wider, less consistent range of shots against seems to translate to the flatter, more predictable range of chances given up it doesn’t seem problematic and is more likely a byproduct of the defensive system and its focus (i.e. giving up attempts isn’t as important as giving up chances). The above map is the greatest visual representation I’ve seen that these Canes are not our Canes of old. They are committed to Bill Peters and his method of winning hockey games. The fact that it’s a bunch of first year pros doing it on the back end game after game is astounding.

Also, when making comparisons to the entire league’s ‘against’ heat maps, the Canes are looking like quite a reliable bunch. The Foundation of the Future

During this surprising season fans are seeing the creation of a foundation. A foundation that might could get us some really big wins in future Mays. There’s still a lot work to be done, but there’s a strong sense of hope too, which was not always the case with this team.

If years from now Ron Francis has made good on his third successful go at making his franchise relevant, and our team is making the playoffs on a consistent basis, look back to this year and give a wistful nod of the head or sip of the whiskey to players in mentor roles, like Ron Hainsey and John-Michael Liles, who will likely be gone, but were here when an incredible young core of defensemen started their careers. Drink one for defensive coach Steve Smith and first year club analyst Eric Tulsky too. Do it for all the people who the Canes have selected to teach, advise, and surround this young group of players. So far, so good. This defense-first foundation is coming together quite nicely.

‘Til my next one, you can find me @Cane_alytics where I’ll be thinking about future Carolina Hurricanes playoff brackets.

Wow! This is an excellent post. The optimism and look to the future is indeed encouraging. I can’t unbiased-ly say that I love this blog, but I can say that the people on HFboards that don’t know you speak highly of this blog. Well done, Derek and Mike. I’ll knock back a beer or five in your honor this eve.

[…] 328.com posted a good piece about Coach Peters’ system of a defense-first, and how the Canes are buying into it this […]

[…] weighing his current value to the team compared to what they’d be able to get for him. Liles, as Cane-Alytics would be quick to point out, has been having a sneaky good season, what with the Corsi and the Fenwick and the HOYVIN-GLAVIN. […]