Holy shitsnacks, what a first round! Three game 7’s on the same night, Montreal stomped a mudhole in Tampa, the Blues pulled a Greg Norman, Columbus’ 5th line did all they could, and San Jose remembered it’s the playoffs. If you’re a hockey fan, I don’t know what else you could ask for (aside from your team winning the cup, but that’s so obvious, why would you even mention that).

After going 7-for-8 in the first round (thank you, thank you), I’m tied with Mike Solarte atop the Section328 Bracket Challenge.  At least I didn’t go crazy like so many and pick the Sharks to go all the way. So we’re down to 8 teams now: Bruins-Habs and Penguins-Rangers in the east; Wild-Blackhawks and Ducks-Kings out west. And it all starts tonight. Can’t wait!

Round 2 predictions after the jump. Ryan Suter leads all skaters with an average of 54:25 TOI/gm. (not confirmed)

Bruins/Canadiens: After making short work of their first round opponents, both teams should be well rested to start the series. Despite taking one additional game to dispatch their foe, I think Boston was more impressive than Montreal in round one. Tuukka Rask leads all goalies with an absurd 1.16 GAA and .961 sv%.  As good as Montreal was dismissing Tampa Bay, they won’t have the good fortune of playing Anders Lindback this series. While he’s known to be a playoff assassin, Danny “diving, spearing, piece of shit” Briere only has 2 points in 4 games so far this postseason. Here’s hoping Boston keeps him in line.  Not only will they keep Briere in line, but I think Boston will handle all the men in red, white, and blue (MURICA), and send Montreal home earlier than they’d care for. Boston in 6 Penguins/Rangers: After playing back to back games against the Flyers, the Rangers will only have 1 night of rest (then play back to back games Sunday and Monday) before facing the Penguins. Though the Pens have been able to get more rest, it’s not like they were a picture of a great playoff team against Columbus: they gave up 2-goal leads all the time, Marc-Andre Fleury has been his usual playoff self (which is basically a random play generator), and Sidney Crosby hasn’t scored a goal in 11 straight postseason games. On the other hand, they do have Evgeni Malkin who’s proven on multiple occasions that he’s ready and willing to take over a playoff game.  The Rangers are almost the opposite of the Penguins: they have steady goaltending, forward depth, and don’t have a player known for kneeing opponents in the head.  Despite so many things telling me I should change my pick to the Rangers, I’m sticking with Pittsburgh. Penguins in 6

Wild/Blackhawks: Hope you’re ready for a lot of Toews vs. Parise charts, discussions, and montages, because those will likely be spoonfed to us over the course of this series. Jonathan Toews has 7 points this postseason: 4 assists and 3 game-winning goals. That’s just stupid.  Zach Parise is no slouch though. He’s tied for the league lead with 10 points (3 goals, 7 assists). Despite both teams having 14 players with at least 2 points, I don’t like Minnesota’s depth as much as I do Chicago’s.  Toews is on fire, Kane and Keith are averaging a point a game, and Brent Seabrook has 6 points in the 3 games in which he’s not been suspended.  I’m no Corey Crawford enthusiast (someone please make that a quarterly publication), but I have more faith in him than I do something called Darcy Kuemper.  It’s been a Wild ride (sorry), but it comes to an end here. Blackhawks in 5 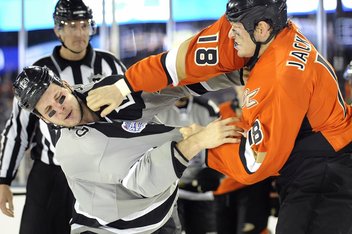 Ducks/Kings: As enjoyable as I think all the other series will be, this is the one I’m most looking forward to. The Kings peeled off 4 straight wins against San Jose, and were damn impressive doing so by outscoring the Sharks 18-5 in those wins. Anze Kopitar has a share of the league lead with 10 points, Justin Williams is showing up big in the postseason (no surprise there), and Jonathan Quick found his big bag of playoff success, stopping 94 of the last 96 shots fired his way. Anaheim, to the shock of no one, is led in the scoring column by Getzlaf and Perry. But in their comeback wins against Dallas, it was guys like Bonino and Smith-Pelly have come up huge. Much like the Pens/Rangers series, I’m tempted to shift my pick and go with the Kings. Despite my lack of confidence in Anaheim’s goaltending, I’m sticking with the Ducks. Anaheim in 6