How do I luck? PDO and the Canes.

Hi friend. Do you have a moment to talk about our Lord PDO?

One of the prime existential questions that have plagued Canes fans since the  start of Bill Peters’ tenure as head coach is: are the Canes really unlucky or do they just suck? How can a team that has likely already qualified for a Corsi bowl game be so bad at actually getting one of those Corsis to blossom into, you know, an actual #$@&ing goal? This season, like those in the recent past, may turn into a slog of frustration and discouragement over the weird dual personality of the Canes. One one hand, we’re a team that can straight up out-work teams, and if that opponent is taking a night off, we can run up the shot clock and the Corsi clock for some pretty ridiculous possession totals. On the other, slightly more malformed hand, we’re a team that can be prone to short-lived, yet dooming, horrible defensive lapses, soft goals against that devastate momentum, and a bewildering lack of goal scoring finish. So, are the Canes unlucky or do we just suck? The simple answer is a little from column A and a little from column B.

The first concept to bring up when discussing “puck luck” is certainly PDO or Pacific Decadal Oscillation, which has been described as an El Niño-like wind that– Actually scratch that, it’s named after a commenter on a hockey blog that was involved in early tracking of the statistic. Bill Peters warms up the team during one of his famous pre-game speeches.

PDO is simply shooting percentage (shots that turn into goals) + save percentage.

It can be measured at the team level and the individual level. It’s mostly used as a litmus test to see if a team’s play is sustainable or if there are outliers present, either due to amazing/horrible goaltending or amazing/horrible shooting percentages. It can be a sign that things are about to come back to earth if your PDO is uncharacteristically high or a sign that things may get better if it’s really low.

By now, most hockey nerds on twitter have seen the lovely PDO charts put together by wonderful statisticians like @Classlicity that show the range of the components that make up PDO and classify teams into luck categories. Anywho, so far this season the Canes have hovered around the bad bounces corner of the chart. Our goaltending improved for a stretch but has recently come back to more of what we’ve seen in the more recent years. Our shooting percentage has been embarrassingly awful for a while as seen here:

So, our team is apt to giving up soft goals, or goals on a low number of shots against, and we don’t get the goal support to make that a non-issue. Obviously not a recipe for a winning team. It’s a freaking shame too, because systems-wise this team has the potential to be outstanding. Once shooting percentages increase, either through changes in talent or luck, we might be able to cope with occasional shoddy goaltending performances because we put up so many shot attempts. Decision making from the coaching staff also plays a part in this and can’t be let off without a mention. Thus far Jordan Staal hasn’t exactly been complimented with the most talented linemates this season and a certain young goalie has been riding the pine instead of showing he might be the way of the future. 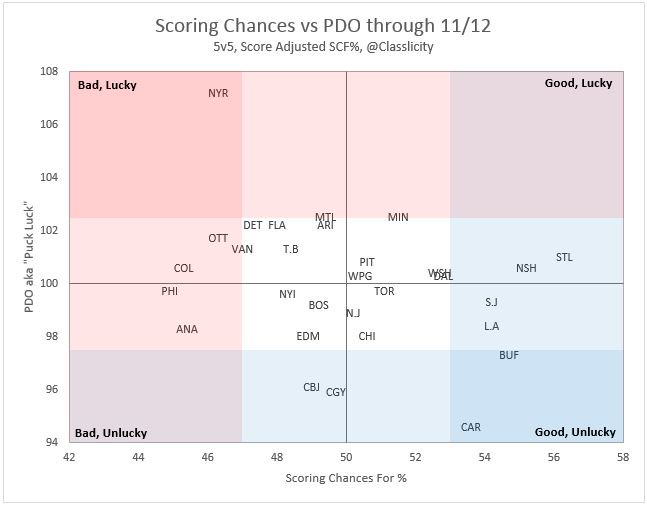 The Canes performing in their system are excellent, but they still can’t convert having the lion’s share of scoring chances to actual $@^%ing goals.

The game is also tightening up to a startling degree. It’s harder to score in the NHL than ever before. This season goalies are making high and medium danger saves at a higher rate than previously recorded as seen in this fantastic graph from @NMercad. Teams that have had trouble scoring in the past will likely have more trouble this year, and on top of that, there’s less room for error on the goalies’ part. Welp drink. Luck is certainly involved. Poor Skinner has been cursed this season, and it’s heartbreaking to watch such a naturally joyful kid play so frustrated. There’s also been a fair share of bad-to-horrible-to-thisisfine.jpg bounces, but when this is a familiar trend from season-to-season, it’s more than luck. It’s personnel, talent, too-many-passengers, poor line up choices, poor usage decision making, and you-name-it. I won’t get into well worn #narratives here about over-slotting players and it being time to move on from blah blah. This is just a symptom of rebuilding and a new GM slowly moving away from the old GM’s regime.

This is what it comes down to:

Patience is a four-letter word when it comes to fans in the midst of a 7th season without the playoffs, and who are constantly bombarded with garbage about attendance, angry Whalers bloggers, and 1st career NHL goalsapalooza, but it is what it is. People say it’s better to be lucky than good. Welp, we’re neither, but we’re fortunate that GMRF seems very capable this far, and that gives me faith that I don’t need to worry my head about it too much and the pieces will fall into place. If it all goes to plan, the Canes will make their own luck and the bounces will come, but don’t forget to do your regularly scheduled ritual sacrifices to the Hockey Gods just in case.

Til then, I’ll rest my head on my Stormy pillow pet and dream about bright futures with shooting percentages above 8%. It’s @Cane-alytics‘ birthday later this week so I’ll take a week off between articles. Also, if you’ve been reading my stuff regularly you’ll be happy to know that, this Sunday against the Kings, my friend Mandy will be attending her first NHL game since the final Whalers game. Pretty cool that I was / will be there for both, with only a decade+ in-between.