Since the short NHL Christmas break is fast approaching I thought it would be fun to check out the Canes roster and dole out grades based on how our guys are doing in terms of hockey’s analytical metrics. Grades are weighted more on the analytical side of things, but not entirely so, and the data used come from war-on-ice.com and puckalytics.com.

First we’ll look at the defense and then we’ll hit up the goalies and forwards after Christmas. For confusion about acronyms check out glossaries here and here. 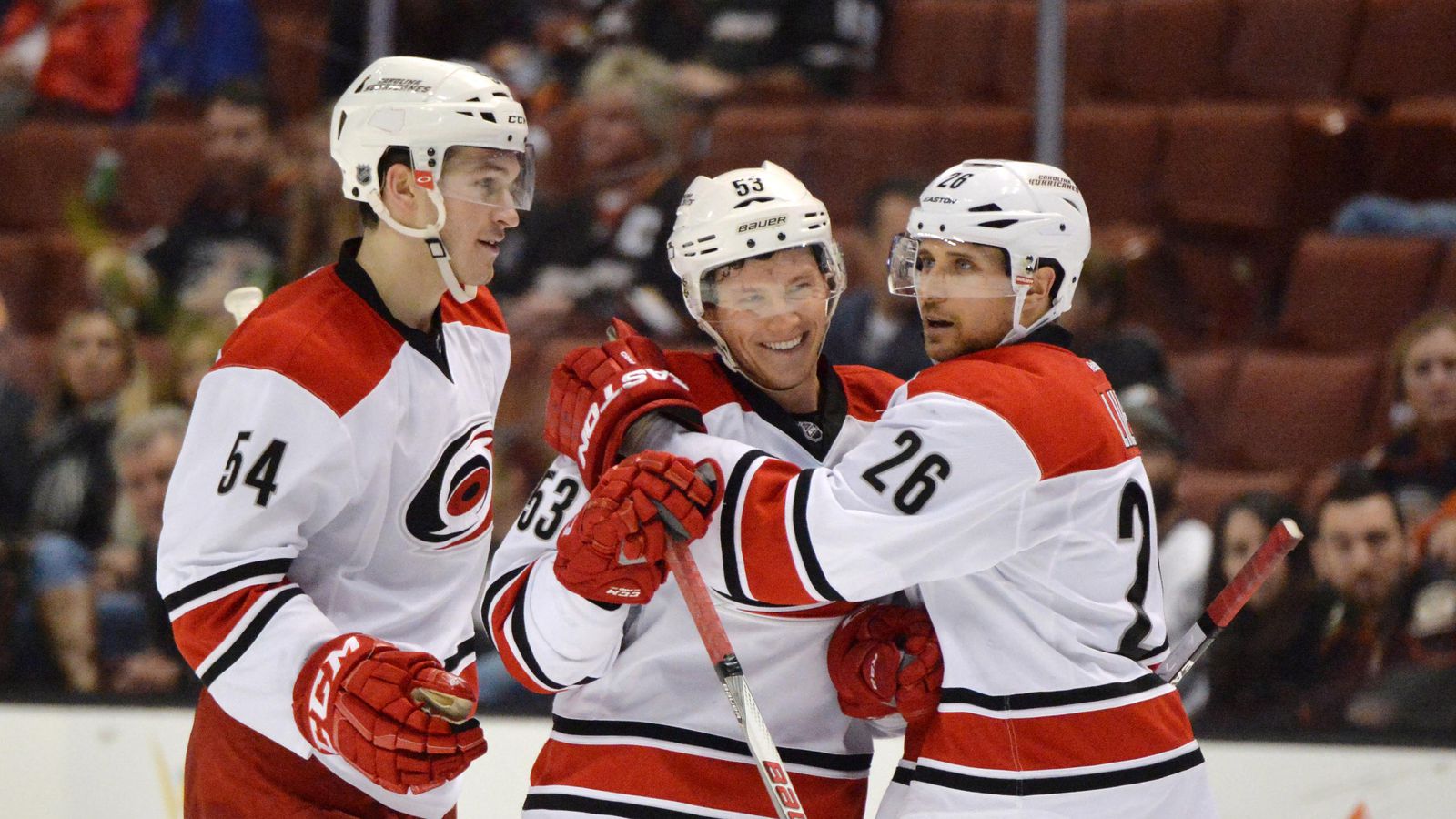 The Defense – (All data at Even Strength)

Noah’s intelligence, poise with the puck, and hockey sense show more and more as the season goes on. The Power Play just flat out looks better since he was put on it, and now he’s pretty much quarterbacking it.

When Noah is on the ice we tend to generate more than when he isn’t.

Noah is high event. Goals and Corsis happen when he’s on the ice.

The first one is pretty spiffy and a good signal that his time on the Power Play is well spent. He helps his team generate up close chances at a faster rate than any other Cane. While Ryan’s sample size is smaller due to injury and demotion to Charlotte, his fancy stats show a lot of upside. It also suggests that the tentative hockey playing our eye-tests often pick up may be missing the big picture.

Murph is good at generating shot attempts and in his limited time in Raleigh was quite good at suppressing them. His ability to generate his own shot attempts makes him worth another look as a Power Play quarterback in the NHL.

I hope he gets another shot at the team in the new year to see if he can accumulate points when playing more (and with a more seasoned Hanifin). He’s gotta be better than 4 assists in 18 games suggests. Perhaps Ryan should be used in favor of Jaccob Slavin, who might benefit from further development in the AHL. JML’s game has clearly changed from being an offense-generating puck-moving defensemen to being one of the superior Canes at shot suppression.

Liles has found success in limiting opponents’ up close chances and Corsi generation.

Liles does not generate a lot of shot attempts. He’s 3rd among Canes defense in actual shots with 44 (Faulk-98, Hainsey-59), soon to be passed by Hanifin. With 5 points in 33 games and a reduced role on the Power Play JML has found new strength in his defensive end.

Twenty-seven points in 33 games. Twelve power-play goals. Where would this team be without Justin contributing offensively and soaking up the most minutes against the opponents’ top lines? I think all Caniacs can agree that we all look forward to the day the C gets sewn on his sweater.

Faulk’s Corsi against stats take a massive hit from playing the most minutes a night and facing the top opponent lines. And for most of that he’s been paired with Ron Hainsey, who would likely be a bottom pair D on many other teams. As Hanifin emerges as Faulk’s partner over the next few seasons it’ll be interesting to keep tabs on Faulk’s Corsi Against numbers. Can he be a shutdown guy while being a dynamic offensive player?

On the flipside, his Corsi For number are impressive and show he is an essential cog to Canes offensive.

Canes-alytics Grade:  B- Even Strength / A+ Power Play

It’s a small sample, but Jordan on paper doesn’t look as bad as expected. I’m glad that the Canes rewarded his lengthy AHL service with a decent contract for him this year, but it’s clear he doesn’t have a future on the club.

Pesce is playing beyond expectations. The poise he demonstrates in the NHL at his age is remarkable. The fact that he’s earned a unwavering spot on the roster while being really useful makes him this year’s Victor Rask.

Pesce is usually paired with Liles and has a similar stat line to him. Solid at shot suppression and a little lacking with shot generation.

Perhaps what is most surprising about Hainsey this year is that he’s scoring a point every 3rd game. As he’s regularly paired with Faulk, their stat lines will be similar, but in Ron’s case he has the benefit of playing with Justin rather than the other way around.

Like Faulk’s, Hainsey’s pedestrian Corsi against stats come from top minutes against top NHL talent. However Hainsey is less skilled than Faulk at generating shot attempts and offense generally. I have to admit to being quite surprised by Jaccob’s stats here, especially when he’s been playing so well with Hanifin lately. It is a small sample size of 14 games as well.

Maybe Canes fans should not be as quick to lump Slavin in with Pesce and Hanifin, which is something I know I’m guilty of. I think it might be best for Slavin to return to the AHL and develop, which would also give the Canes the chance for one long, perhaps last, look at Ryan Murphy.

(I feel shitty about that one)

I will continue the Holiday report card with the Forwards (and maybe Goalies – won’t that one be fun!) sometime after Christmas.

I hope all of you have a wonderful holiday season and get to unwrap some fresh new Canes jerseys and shirseys later this week. If you wish to yell at me for this arbitrarily put together grade assessment find me @Cane_alytics.